How Some Parents are Paying for College

Based on data from the College Board, here is the average annual cost of college education, including tuition, room & board, books & supplies, transportation, etc.:

That is the AVERAGE Cost for Just ONE Year!

As parents, we love our children and will do what it takes for them to succeed, including saving for college. With the rising costs of college, however, saving and paying for college has required parents to get more and more creative with their financial strategies for meeting their children’s higher education needs.

For a long time, one of these strategies included a loophole in the tax code where parents could set up investment accounts in a child’s name. By establishing investment portfolios in the name of a child, the income from those investments was considered income of the child and not of the parent and was taxed at the child’s lower tax rate.

In some circumstances, given that most children have no additional income besides this investment income, the tax could be avoided entirely using this strategy. Especially if the income fell below a certain level and, even the children who exceeded the taxable threshold were taxed in far lower tax brackets than if the income was attributable to their parents who were taxed in higher tax brackets.

In 2017, this loophole was closed with the adoption of the so-called “Kiddie Tax” as part of the broader tax reform that occurred at the time. It was intended to prevent parents from using their kids to get unfair tax advantages and has gone through a couple of iterations as to where it is today.

Initially, the Kiddie Tax aimed to wipe out the original loophole entirely by taxing a child’s investment income at their parents’ tax rate on income above certain levels, thereby eliminating any tax benefit to setting up a separate investment account for the child.

After two years, the Kiddie Tax went through another iteration. Rather than applying the parents’ tax rates, the tax rates for trusts and estates were used for a child’s investment income. Those rates range from 10% to 37%, just like tax brackets for individuals, but the income levels are more compressed. For instance, the top 37% bracket kicks in at only $12,750 for the 2019 tax year. Compare the trust and estate rates vs. the married filing jointly rate below: 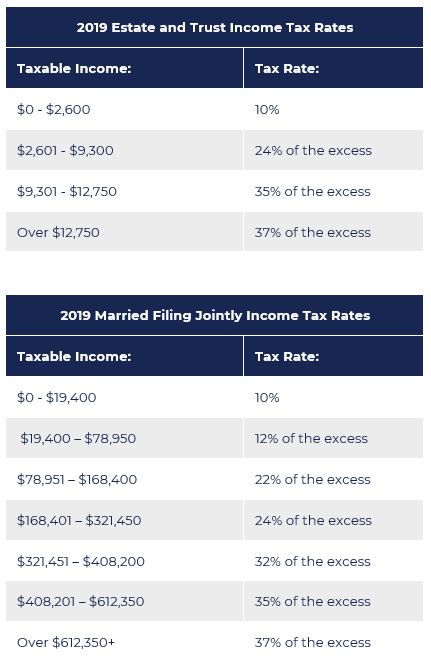 This second iteration taxing a child’s income using the trust and estate rates had two consequences:

To remedy the second situation, lawmakers passed legislation that gave parents the option to include the child’s income in the parent’s return or have the trust and estate rates apply to the child’s income. Low-income families avoided the higher tax rate, and for families whose children don’t earn more than $12,750, they can take advantage of the lower trust and estate rates.

So you’re probably asking yourself how much you could save a year by taking advantage of the Kiddie Tax. The answer is $1,642.83, the difference between the tax of $4,717.5 at the highest parent’s rate (37%) and the tax of $3,074.67 using the trust and estates graduated rates.

A savings of $1,642.83 may not seem much, but let me let you in on a secret. The point of this article wasn’t about how much you could save on taxes to save for your child’s education.

The point of this article is that if you took that $1,642.83 savings from each year from your child’s age 1 through age 18, and invested it in a private investment fund, this is how much you would have at the end of 18 years depending on the average annual return on investment (ROI – includes income + appreciation).

Parlaying Kiddie Tax savings into an income-generating investment vehicle is one creative strategy for accumulating the necessary funds to pay for a child’s education.

Whatever sources you can squeeze extra funds that you can inject into an income-generating investment with appreciation will, in the long run, will work to yours and your child’s benefit and help your child achieve their educational as well as financial goals.